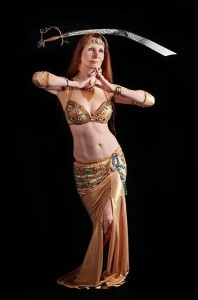 “Gypsy” (Paula Reid Stump) is a former model and actress and after playing the role of Gypsy Rose Lee in the Little Theater’s 1978 production of “Gypsy”, she borrowed her stage name…”Gypsy”.  2020 marks 32 years of her involvement with Middle Eastern dance. She teaches classes in Winston-Salem, and in 2007 she produced her first, instructional DVD. She is also the director and instructor of the student troupe, Tollabet el Gypsy.

Gypsy has appeared twice with the Winston-Salem Symphony orchestra at their “Sunday at the Pops” concert and at the “Music at Sunset” where she performed to Bacchanal from Samson and Delilah. Her studies have taken her to San Francisco, Atlanta, New York, Seattle and finally to Egypt and Turkey, where she has received training from internationally acclaimed master teachers such as Delilah, Suhaila Salimpour, Nadia Hamdy and the famous Egyptian choreographer, Mahmoud Reda. Gypsy feels that Middle Eastern dance or “belly dancing” is a wonderful way to exercise and awaken ones feminine creative processes.

Paula is originally from Lexington, NC and now resides in Winston-Salem, where she is owner of PR Stump and Stuff, Inc., a promotional products advertising firm. Please visit www.prstumpstuff.com for more information about the firm.